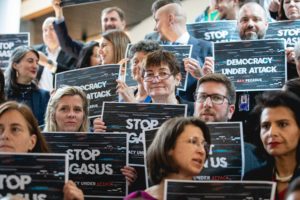 Also within the European Union, journalists, opposition politicians, critical prosecutors, diplomats, lawyers and civil society actors are being spied on with Pegasus and similar tools. This violates Union law. The European Parliament therefore decided on 10 March 2022 to set up a Committee of Inquiry to investigate the use of Pegasus and equivalent surveillance spyware. The vote to establish the committee was carried 635 in favour, 36 against and 20 abstentions.

The inquiry should gather information on the extent to which the Member States‘ use of the surveillance tools violates the rights and freedoms enshrined in the Charter and thereby jeopardises the values enshrined in Article 2 TEU, such as democracy, the rule of law and respect for human rights. To this end, the investigation mandate consists of 18 different tasks.

The Committee organises hearings and closed meetings, fact-finding missions and commissions studies. After 12 months, its work ends with a final report. Rapporteur is the Liberal Sophie in ’t Veld.

All hearings and meetings:
… Weiterlesen

Functioning of Pegasus and equivalent surveillance spyware (10 May 2022)

Today, April 19, the EU Parliament’s Committee of Inquiry into the use of Pegasus and similar spyware in Europe met for the first time in Brussels. On the agenda was the election of the chair and its three representatives. The elected members were: