Domenico “Mimmo” Lucano, ex-mayor of Riace in Italy, rejuvenated his town by offering a welcome & solidarity to refugees. He now faces 13 years in prison for “aiding illegal immigration”.

Riace became famous all over the world for its great solidarity and success, and faced attacks from the right and racist forces. This disproportionate and unjust prison sentence has brought thousands of people to the streets throughout Italy in recent days.

Left MEPs have written this letter of solidarity to be sent to Mimmo Lucano.

As MEPs of The Left in the European Parliament, we want to express our solidarity, our full human and political support to you, your comrades and all those who were protagonists in the construction of the experience of Riace, the city of hospitality. Thanks to you, this small town in Calabria became an example of humanity and hope against xenophobia, racism and fear.

The first-degree sentence is not simply disproportionate, but unfair and absurd. We see here exactly what criminalization of solidarity looks like. We have to speak out and stand up against this across the EU; that is why we send our full solidarity to you.

This sentence is an attack on an example that showed how it is possible to open doors and welcome refugees, building communities instead of walls when people are fleeing from war, poverty and misery. Riace was all of this. It was the opposite of the hate speech on which the extreme right across Europe builds its racist narratives. It was the opposite of inhumane European migration policies, which focus on building Fortress Europe and stop people from entering the EU at all costs. Riace was an example, admired across Europe putting the dignity and human rights of migrants first.

You must know that you are … Weiterlesen 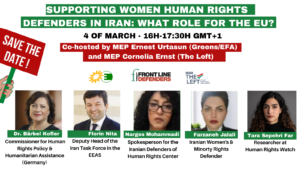